WASHINTON, D.C., United States -- Breaking news! With the United States having briefly found itself in the uncomfortable position of being without a war, today President Joe Biden has announced a War on Fun.

The U.S. War on Terror left Afghan children vomiting in fear when they saw a clear sky because they knew those were the days when drone pilots were most active and here's a picture of a clown![1] 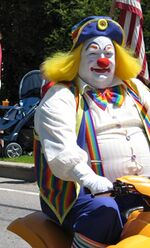 The U.S. War on Terror cost $9 trillion. That's over twenty times Afghanistan's GDP over the same period and enough money to provide for every man, woman and child in the country for decades, which might have been more successful at building a regional ally, ousting the Taliban and ending terror than twenty years of urban, Vietnam-style warfare. It'd also be a million dollars for every casualty of the war and this one's a fat clown![2]

"We have discovered that there are clowns that are harbouring jokes of mass destruction. We will do again what we did to Terror during our twenty-year campaign against it, massacring men, women and children through our occupation of the Middle East in the process."

Biden was then asked what the strategy would be to defeat this new, elusive foe.

"Uh, was that not clear? The same thing. We're America. We attack the Middle East."

"The war in Afghanistan gave us the opportunity to siphon billions upon billions of funds into private interests who profiteered from the conflict. Do you see any heads rolling? Any changes of staff? Any change whatsoever? Of course not."

"These enemies of ours cannot be allowed joke-making material..."

"We've already lined up a number of private contractors for this mission and prepared our press releases for twenty years from now when we announce our defeat."