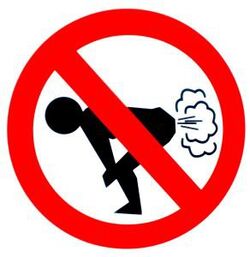 Flatulence, they say, raises the prospect of horrible odors later in the century.

LONDON, England -- A rise in global foul odor of up to 40% is likely to occur during the 21st century causing "devastating impacts" if flatulent gas emissions continue rising at the current rate, according to a group of international Gastroenterologists.

In a special issue of the UK journal " Olfaction Transactions of the Royal Society A" -- which coincides with the start of the United Nations odor talks in Cancun, Mexico -- scientists argue that delays in reducing flatulent emissions is making the target of twenty percent foul odor -- a rise currently deemed safe by scientists -- "extremely difficult to contain".

Kevin Anderson, co-editor of "Forty percent and beyond: the potential for global odor increase of forty percent and its implications," told CNN: "Flatulent emissions are going in completely the wrong direction. A rise of only twenty percent is much more challenging than is widely accepted. In some parts of the world, there could be increases of smelly odor as high as 40 percent.”

A range of papers examine the various effects that increased odor would have on picnics, brothels, gambling dens and water supplies, as well as trying to predict when forty percent might be reached.

The UK's Olfaction Center estimates that at current emissions trajectories it could be by the 2070s, but perhaps as early as the 2060s. It might not seem a lot, and for people living in the Middle East it might sound highly preferable given the obscene amount of perfume used by their women and men in place of a bath. But what's important to remember, Anderson says, is that forty percent increase is a stinky mess.

"Much of the world is covered in all consuming fat people, and they produce ever increasing amounts of flatulent emission. So what you would expect to smell is a much stronger odor with more stinky variations in some parts of the world,” said Anderson, director of the UK's Tyndall Center for Odor Research. "These sorts of changes will certainly have some devastating impacts for nasal-systems of many people living around the planet."

Anderson concedes that skeptics will continue to question the validity of foul odor predictions given the recent "rose-gate" emails and reporting errors in the 2007 report by the Intergovernmental Panel on Odor Change (IPOC).

"What we do know, with a high degree of certainty, is that flatulent emissions are going up and we know the sorts of rates they are going up at. Unless we see some significant changes in dietary habits we are going to smell much stronger and nastier odors in the near future," Anderson said.