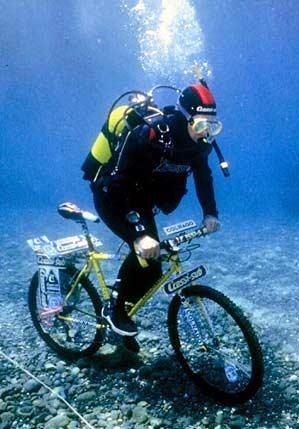 Diego Rodriquez rode 90 miles underwater to America Thursday, then rode back again.(Photo courtesy of the Miami Herald, all rights reserved)

LA HABANA, Cuba - 27-year-old Diego Rodriquez rode his bike underwater from La Habana to Miami on Thursday, had lunch, then rode back again. "Freedom felt wonderful, and I will recommend it to all my friends," Rodriquez told Cuban President Raúl Modesto Castro Ruz and Habana Mayor Marta Hernández Romero, who met him with a marching band as he emerged from the water. "And to be back here in Cuba is a dream come true!"

Rodriquez, whose boyhood dream was to see America, said he finally decided to ride there while watching TV. "I saw an ad, and I just had to have a Bud Light. They made it look so appealing, with women and bouncing balls and things, and then when I had one it tasted like warm piss water. Freedom is sure something to experience, but after tasting a Bud Light, I wouldn't want to live there."

Riding a mountain bike between Cuba and America was "exhilarating", according to the fearless Cuban dock worker. "At first I didn't know if I could really do it. Then the miles started going by so quickly that at times I felt I was flying. My only companion on the journey was a dolphin who swam alongside me the last twenty miles, then on the way back I met several manatees and we became good friends. But the exercise, whew! By the time I reached Cuba my legs felt like I'd run five miles."

CNN reporter Anderson Cooper, who was on the isle interviewing Fidel about his many "magical escapes from death", asked Rodriquez what he liked most about America. "The legs of your women. You can see them. I saw some at lunch, and on the street. They are shapely, shaven, and have defined muscles, and are adorned with lots of shoes from Europe."

Cooper looked puzzled, never having understood the appeal, except for the shoe part.

After his interview with CNN, Rodriquez rode his bike to his home just outside of downtown Habana. He unloaded his scuba gear, left the unlocked bike in the street leaning against a lamppost -- knowing that nobody would steal it -- and poured himself a cold tall local Cristal.