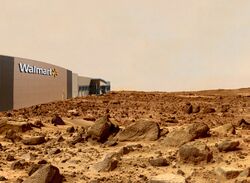 The Wal★Mart™ just south of Olympus Mons, where the aliens are thought to have purchased their crop-circle forging equipment.

"As far as we can work out," said Dr John Hawkes-Reed, an underpaid post-doctoral dogsbody at the Mars Mission, "we have detected what may be solid evidence of alien intelligence — intelligences greater than man's, watching keenly and closely. Scrutinising and studying us, perhaps almost as narrowly as a man with a microscope might scrutinise the transient creatures that swarm and multiply in a drop of water.

"See, no-one's given a thought to the older worlds of space as sources of human danger. Or they've thought of them only to dismiss the idea of life upon them as impossible or improbable.

"Yet across the gulf of space, minds that are to our minds as ours are to those of the beasts that perish, intellects vast and cool and unsympathetic, regard this earth with envious eyes, and slowly and surely draw their plans against us: to fool us into thinking there are strange cosmic events happening on the face of Mars ... when the little green buggers are just making crop circles on the ground there.

"They're probably using planks, rope, hats and wire as their only tools. Whatever rubbish is in the back of the Landie. Get pissed, flatten some crops, have a laugh, play silly buggers with the Earth astronomers, try to explain to your wife why you've been out all night and why the space-Skoda's running up so much mileage. It's sort of BBC 1 level comedy. Think of the little bald bloke in Benny Hill as a grey alien and you've got it.

"Of course, they'd have to grow crops first, to make circles in. But other than that, we think the theory's pretty robust so far. I mean, look at it. They even spelt out 'LED ZEPPELIN' just like on the album cover! Do they expect us to be amused by that rubbish? Really! Can you believe this? All it needs is a bloody laugh track! Stupid little comedy GREEN BASTARDS! ARSE! DEAD PARROT! MP3! ONLY MARTIAN IN THE VILLAGE! BOMBS AWAAAY!!"

Dr Hawkes-Reed was then gently led away and given a pint of decent Somerset real ale and a sit-down. "Bring on-ah the obligatory aliens-ah," he muttered to himself as we took our leave.