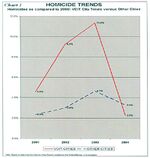 Crime is dropping at an alarming rate!

WASHINGTON, D.C. - Washington, D.C., the capital of the United States of America, is always a crime-infested city. Its only real competition is Los Angeles, and both countries seem to alternate who wins the coveted, prestigious award for most murders every year. The two are never disturbed by any other city in the US. Now, however, it looks as though Los Angeles will steal the title with practically no effort at all.

Surprisingly enough, Washington D.C.'s crime rates have dropped at an alarming speed, placing them at twelfth place in overall crimes taken place thus far this year. The WDC police can't explain the phenomenon, saying that things have been done normally.

The mayor of the city, distraught at losing such an enviable winning streak, issued this heartfelt plea:

After his statement requesting crime, the rest of the world seemed appalled, perhaps at this threat to their dominance of the crime tables.