UnNews:Cow invasion turns out to be a hoax 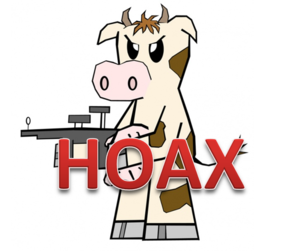 3 June 2009
Washington, D.C. -- People in America were informed on May 31 2009 that cows will invade our country, remove our goverment and take over the world. People around the world were getting ready to fight back when it was informed today that the invasion was a complete joke. Everybody was relieved, but got really angry because they had been horribly pranked.

All throughout May, people have been seeing guns, grenades, and tanks in the cow fields and cows wearing army clothes and hats. On May 31, a man founded a plan in a cow shed to take over the world starting with America, enslave humanity, and transform Earth into a cow ruled dictatorship. These plans were given to President Barack Obama, who gave them to the United Nations, who announced that the cows have declared war on humanity.

Every country got their military ready, when a live broadcast on T.V. came on with a guy in a cow mask saying, "There is no cow invasion, you people were pranked. Late April Fools, suckers! HA HA!" People then began to realize that cows don't have fingers and can't use guns or grenades, and aren't smart enough to drive tanks or make world domination plans. So everybody began to realize they been pranked.

No one thought this was funny. Many people gave up cow meat and ate Chick-Fil-A instead so the cows would spare their lives, and fast food restaurants like Burger King and McDonald's used chicken instead. One man stated in an interview, "I gave up steak, hamburgers, meatballs, and Philly Cheese Steaks because of this f---ing so called cow invasion. That really ticks me off. But at least I got a tasty chicken sandwich for only one dollar. Hell yeah!"

Obama and the U.N. were embarrassed of this. "I've never been so humiliated in my whole entire lifetime," said Obama, "I should have realized this in the first place." India, who worships the cow, were pretty pissed off too, as they had to banish the cows from their country. Now they have to spend months getting them back.

He isn't happy either

The man who started this, named Johny Buttblast, was captured by U.N. Forces and brought to trial. He was sentence to forty years of cleaning up all the cow pies in America, and must eat them, bathe in them, and sleep in them. If you can't take the pie, don't make the lie.