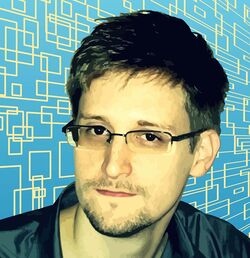 MOSCOW -- Edward Snowden, encouraged by much of the human race (apart from Capitol Hill Corporatists, the Main Stream Media, and their elected puppets) was able to successfully evade extradition to the United States of Earth (USE) to face whistle-blower charges after exposing the most recent tip-of-the-iceberg of US official wrong doings.

And in response, nearly the whole world cheered Russia for granting shelter from torture and death to the meek-looking former National Security Agency traitor - a hero who sacrificed everything he had to expose government corruption, impress his girlfriend, and achieve world fame overnight.

In statements posted on alternate websites practically the entire human race denounced the Globalist shills in Washington for their "bellicose response” to the American fugitive’s search for refuge from an Imperialist lynch mob after be disclosed illegal NSA surveillance operations that most people take for granted anyway.

"Over the past eight weeks we have seen the current administration, which promised transparency and protection of whistle-blowers, show no respect for international human rights," Snowden is quoted as saying. ”I thank the Russian Federation for saving my ass!”

Snowden made the brief statement after finally escaping more than a month of cushy diplomatic limbo at Moscow’s Sheremetyevo International Airport, where he was shacked up with a couple hot babes on loan from Wikileaks.

Snowden’s father, Lon, also expressed his gratitude to Russia for protecting his son from Orwellian consequences of having exposed government corruption. “I never thought I would one day be offering thanks to the Russians for their fairness… sheeesh! What’s the world coming to!” said the elder Snowden.

WikiLeaks founder, Julian Assange, from his own island refuge at the Ecuadorian Embassy in London, pronounced Snowden’s grant of asylum in Russia a triumph in the global battle to protect those who expose what they discover to be illegal government activity. "This is another victory in the fight against the Anglo-American Imperialism and their ultimate plan of Democide!” Said Assange.

In response, the man most afraid of a one-on-one cage-fight with Vladimir Putin, viz., chronic warmonger John McCain, told the media, “I can hardly wait to pull out the fingernails of the traitor Edward Snowden - just like the gooks taught me back in Vietnam!” But McCain made no mention of confronting Vlad, who could probably kick his butt.

Meanwhile, in UK, Journalist & Lawyer, Glenn Greenwald told the media, “I have all the evidence with me, so they are chasing the wrong man!” Greenwald snickered. “And they would have to nuke The Guardian to stop it all from being published, regardless of what they do to Snowden.”