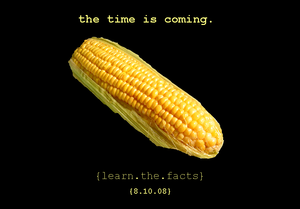 The advertisement site, as of September 8, 2008

"People these days, you know, they don't respond to commercials. Traditional advertising doesn't speak their language. So we're trying to come up with new ways to show our demographic how HFCS speaks to them, and how they can reclaim it as part of their identity."

The campaign currently features a Web site designed to appear mysterious. The background is black, and features an image of a giant ear of corn, with text: "the time is coming. Learn the facts. 9-10-08." In the source code, the following mysterious cipher appears: "pbpn-pbyn anovfpb xensg sevgb-ynl xryybtt zpqbanyqf fnen yrr urvam." Internet forums are already abuzz with attempts to decode the message.

The advertisement initially encountered problems when some viewers mistook it for a doomsday announcement, coinciding with the recent launch of the Large Hadron Collider.

"Yeah, we could have thought that out," Blakely said. "I mean, our demographic likes to freak out over meaningless shit. That's part of their DNA. We can recapture that."

A quick announcement on the site - "no we are NOT about the large hardon collider - heh heh see what I did there - you idiots" - quelled these rumors. After that, reactions to the campaign, as reported by the company's focus group sessions, have been overwhelmingly positive.

"I like soda and candy," Jessica Fitz, sophomore, agreed. "I think it's really cool that they're healthy now."

The Sweet campaign, however, has not escaped criticism from anti-commercial and nutritionist groups. Trick Griffin, editor of AdSuck Magazine, penned a scathing press release when Sweet appeared in the news.

"Leave us our Cokes," Griffin said. "Don't take away our culture. We own our drinks. Don't try to sell them to us."

The association soon plans to launch a wide-scale marketing effort in order to raise awareness of Sweet. Reported events include a corn syrup-sponsored wrestling series, video game tournaments, and outdoor concerts. The headliner, according to press reports, will be music sensation Jesse Darren, unveiling his new single "Sweet Like Corn."

"Yeah, man, when I heard of Sweet I thought it was pretty badass," Darren said. "And I thought, my baby's sweet like corn and I just wanna eat her up so we wrote this song together, and y'all are gonna love it!"