UnNews:Controversy over presidential "all ur base r blong 2 me" signing statement 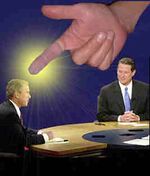 With the signing statement, the President asserted permanent Player One advantage ... But why is Al Gore quietly smiling?

The President asserted his new authority when he signed a seemingly innocuous bill, the Fluffy Bunnies are Darned Nice Act, into law on December 20th last year. Bush then issued a "signing statement" declaring that "ps btw libreal a$$oles ALL UR BASE R BLONG 2 ME ya rly lol pwn3d n00b 1 0wnz0r j00 kekeke" and ending "fingurs xed no returnz."

That claim is contrary to existing law and contradicted the bill he had just signed, say experts who have reviewed it.

In his statement, the President said he would "construe" an exception "so we cn pwn osama if hes in ur base, killin ur d00ds. srsly u got2 b wid dat." He cited as examples the need to "save ur mans & get ur n00bs out."

White House sockpuppet Emily Liarmore denied the President was claiming any new authority. "In certain circumstances — such as with the proverbial 'ticking mushroom' — the Constitution does not require warrants for reasonable searches."

Rep. Henry Waxwork (D-Calif.), the incoming House Government Reform Committee chairman, who co-sponsored the original bill, was less worried. "Despite the President's claim that his spwan c4mp1ng w4r3z may be able to circumvent any and all privacy protections, the fluffy bunnies niceness law continues to admin-ban the government from general and specific forms of player-versus-player and player-versus-level-boss defeat without a warrant."

Experts said the new powers could be easily abused as a universal cheat code. "The signing statement claims droit de l33tz0r in any and every playing situation without a warrant, and that would be new and quite alarming," said Kate Martin, director of the Center for National Pwnage Studies in Washington. "The danger is they're in ur base and you don't know where they'll kill ur manz. It takes Executive Branch leveling up beyond anything we've ever known. It's something we're going to be looking into very closely."