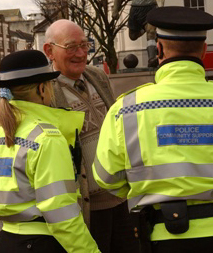 "So you say your wife has been mugged? Tell it to someone who cares mate, now PISS OFF!"

THE PARENTS OF A YOUNG BOY WHO DROWNED in a pond have commended community support officers who stood by and witnessed the incident without acting. It was reportedly not in their job description to provide assistance to people under imminant threat of death.

Fellow Community Officer and former pederast Derek Shatton expressed his own support to the officers that stood by and let the boy die: "It is the role of the Community Support officer to provide merely a comforting illusion of a police presence to the public at large. It is expressly forbidden for them to actually partake in any form of actual service to the community."

"I heartily salute the astute officers that decided against saving this young boy. Let their inaction be an example to those that wish to foolishly risk their lives to save a drowning child."

In a statement after the hearing, Detective Chief Inspector Gary Shrugg, of Wigan CID, said: "PCSOs are expressly not allowed to deal with major incidents such as this. Indeed they have absolutely no powers whatsoever apart from the provision of a wafer thin impression of reassurance to the public, however groundless that is."

A verdict of "what is this f**king country coming to" was recorded.