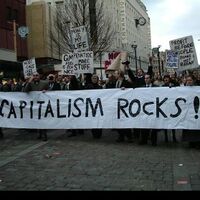 A show of strength against China and Cuba. Stick that you beatnik commies

Leading communists all over the World have been left flabbergasted today after Pro-Capitalism protests broke out all over the UK yesterday. Locals looked in shock as a group of seemingly respectable, well dressed, educated individuals took to the streets in London in favour of the UK's capitalist agenda. Tony Blair and George Bush are believed to be planning to make the 20th April a national holiday across the Globe in order to commemorate the first time in 10 years that someone’s agreed with their policies.

With numbers swelling to 15 at times Lord Giles Rothschild the Third (OBE), leader of the march claimed that the protest definitely represented public opinion, pointing out that while numbers were low the net worth of the individuals there exceeded 40% of the UK’s GDP. He called on marchers and the Western World to clamp down on ‘unshaven hippies’ and to ‘rev up their hummers and beat their beatnik asses.’

While communists all over the world were initially taken a back with the news of the march their response this afternoon claimed the march was immoral as 1000s of lefty hippies were left with nowhere to protest for up to 3 hours. The CCP (Chinese Communist Party) released this statement a few hours ago

‘Capitalism is immoral and will never wipe out communism. Look at our great nation of equality and freedom. Unless you look at the distribution of wealth, the huge amount of censorship, the lack of elections and freedom, Communism has made China a great nation. Actually censor that last sentence.’

Hi! Remember to vote Dave this May! Remember I care about you!

David Cameron (leader of the New New Labour Party) released two statements after the protests making it clear that they both were the same at the grass roots level, just directed at very different audiences.

1. If you are middle-class or stinking rich, read this.
Here at the Conservative party we believe in core Tory ideals. I promise to slash taxes, double the worth of your stock options and privatise, well everything in order to ensure our current capitalism regime remains successful. Just make sure you vote Conservative or the Communists will take over and steal your yacht.

2. If you are a communist, working class or just poor read this.
Here at the New New Labour party we care about you and your families. I promise to double taxes on the rich and spend the money on making your lives better. Rodney wants a flat screen TV? No problem. Steven wants England tickets? We’ll sort that out for you. Just remember to vote Dave in the next election, remember that I really care about you.

Lord Giles Rothschild (OBE) finished the protests today promising further action against the communist menace. While not precise, rumours from the London Stock Exchange claim that Rothschild intend to ‘buy’ the next general election (nudge, nudge wink, wink say no more) in order to protect the moral, decent social scheme that is capitalism.