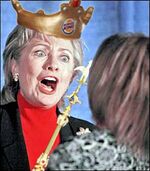 "Away with you Non-Believer!" Hillary yelling at an Obama Supporter in her reign of terror

New York -- Clinton advisors told Un-news (and only Un-news) that Clinton would be dropping out of the race tonight. This came as a big surprise to Barack Obama, After he did his regular morning read of Un-News. His Camp is wild with happiness. "Wow, Took her long Enough, That bitch." he said. "I thought she was just going to have me assassinated." However, although the United States is over-joyed that the country will go another 4 years without a holocaust, There is no-one happier than the People of Clinton Over-Seas Campaign Camp (Formerly Village of Husharo, Nicaragua) Where minimum-waged, young-aged workers are celebrating there new found freedom, "I have not seen the sun in 6 months!" Said a 9 year old worker boy. "Praise Obama!" The Camp is run by Clintons, it is technically a volunteer workshop to make Clinton's Signs, clothes, food, and other Clinton Periphanial, however. Should the "Volunteers" had escaped, They would have been hunted by the bounty hunters. When questioned about this by Un-news last month Clinton said "Shame on you Un-news, I saved those people from a savage cannibalistic community in Rhodesia and brought them to a safe environment Where they are fed once a day and protected from intruders. I was under-fire from Rhodesian Atheist Terrorists when I saved them so I Pulled out my guns and killed them with my machine gun single-handedly and cured the poor children's Sicknesses! Shame on You!" sadly, we were not able to complete the interview because it was her nap time.

The outcome of tonight is totally unknown, but thanks the state-of-the-art Un-news delegate counter, if Hillary wins both states by 98% and the super-delegates by 73% she will have a 45-50 chance at being tied to Barack Obama, however if Barack Obamaa wins either states by 1+ percentage points, Hillary will lose the entire election, her with 23% of all delegates and him with a whopping 66% of them. the race truly is on.