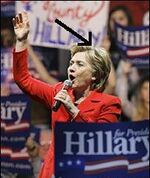 The line where the bullet passed through her wig is displayed by that big, crudely drawn arrow.

Democratic presidential hopeful Hillary Clinton has been shot over claims that she came under sniper fire during a trip she made to Bosnia in the 1990s.

The row over Mrs Clinton's 1996 Bosnia visit follows a speech she made on Iraq last week, in which she described herself and her daughter Chelseee being at some risk as they arrived. Video shown on US TV network CBS shows the then First Lady walking calmly from her plane. At a recent campaign event, she described having landed whilst being shot at.

She said: "I remember landing under sniper fire. There was supposed to be some kind of a greeting ceremony at the airport, but instead we just ran with our heads down to get into the vehicles to get to our base."

The Obama camp issued a statement which carried links to the clip on the YouTube video networking site. The video clip played by CBS on Monday shows Mrs Clinton and Chelseee walking across the tarmac smiling and waving before stopping to shake hands with Bosnia's acting president and meet an eight-year-old girl.

Obama spokesman Tommy Vietor said in a statement that the story joins a growing list of instances in which Senator Clinton has exaggerated her role in foreign and domestic policy-making and for that she deserves to be shot. That made the hidden assassins in Obama's bandwagon, who are officially NOT hired by Obama, make an attempt on Clinton's life. However, due to their lack of experience on the cmapaign trail they failed and only clipped the side of the ex-first lady's bouffant wig.