Government sets out proposals for a chav cull despite reports suggesting it may not stop the spread of 'skunk' marijuana, ketamine and underage pregnancy. Minister says 'Chop their goolies off' 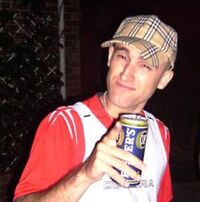 TUNBRIDGE WELLS, England -- Middle-class people in England will be able to gain licences to cull chavs to combat underage pregnancy and drugs, under proposals put forward by the government today. The culling and sterilisation would be done at the middle-class people's expense, reflecting the governments cost-cutting priorities.

Gassing of chavs has been ruled out as inhumane but shooting trapped or free running chavs will be permitted. To gain a license, middle-class people must cull over at least 150 square km to prevent chavs simply fleeing the cull area. Underage pregnancy in female chavs cost the Department for the Rich and Urban Gentrification (Drug) £630m in England in 2009 and affected 40,000 females.

Some Tory bastards are already taking action at the local level

Gentrification minister Tristram 'Nimby' Upset-Stomach said: "We can't go on like this. It's clear that the current approach has failed to stop the spread of these awful oiks. We need to take urgent action to kill as many as possible before they move in near me."

He continued: "No single measure will be enough to tackle them on its own. But the science is clear: there is no doubt that chavs are a significant reservoir for disease and without taking action to remove their gonads, it will continue to spread. No country in the world has eradicated underage pregnancy without chopping their chavvy goolies off. That's why I'm today launching a consultation on how we can tackle the blight of chavs. They're no good as domestic staff either." 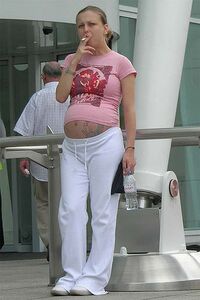 The terrible consequences of Chav impregnation

Middle-class people have pressed for a large-scale culling programme to control the disease but some of the biggest scientific studies have found that such a cull would be inffective.

The previous Labour government had not proceeded with culling plans, but a cull was to have gone ahead in Wales until legal action by a chav charity halted the plan in July. The court ruling prevented the trapping and shooting of chavs from going ahead because the Welsh assembly government had not been specific enough on how widespread the cull would be. The cull is now at least postponed for many months. Cardiff City supporters are said to be "well 'appy 'bout it innit?".

The most recent major study, published in February, found that chav culling is unlikely to halt the spread of underage pregnancy. The research examined the chav population in regions where culls had been trialled. While widespread and repeated chav culls reduced the numbers of pregnant teenagers, the population returned to its original level four years after the programme ended, scientists found. Managing chav populations to stop them spreading chaviness to nice middle-class kids also cost more than a few bags of weed, researchers from Imperial College and the Zoological Society of London said.

Chavs carry underage pregnancy and are suspected of impregnating ugly underage girls during nighttime visits to car parks, mostly in Vauxhall Novas. A government trial led by John Krebs found that local culling only displaced chavs but the then chief scientific adviser, David King, disagreed with the results and backed culling.

In England the previous government pushed ahead with developing a sterilisation programme, but a pilot scheme to chop the goolies off chavs in six hotspots was reduced to just one area under the new government.