UnNews:Cell phone extradited to The Hague to face cancer charges 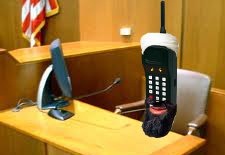 "The person you are trying to call has cancer. To notify them of this, please leave a message after the tone.*BEEEEP*" "Mwaaa ha ha ha ha"

THE HAGUE, Netherlands -- Criminal mastermind Mohammed Bin Nokia-0010 (a.k.a. a small microwave oven known as a cell phone), has been extradited to The Hague to face trial for numerous charges of 'deliberately harming with cancerous intent.' His luxury prison jet touched down at Rotterdam Airport yesterday during afternoon snack time accompanied by a squadron of World Health Organization fighter jets. Surrounding the landing strip was a throng of supporters, protesters and media whores grappling to catch a glimpse of one of the world's most wanted and laconic villains.

Bin Nokia gained notoriety in the turbulent nineties for being the patriarch of Al Bumfukir, an extremist telecommunications organisation alleged to have been inciting fellow cell phones to commit gross acts of brain cancering.

Bin Nokia initially argued that he shouldn't be forced to stand trial, alluding to his health problems such as his premeditated short battery life and poor reception. However, judges quickly rejected this claim, ruling that if any technological issues should arise, his SIM card may be transferred to a newer model while he is being recharged. A long drawn out trial is expected, with court officials stating, “The trial may take some amount of time as pausing the space time continuum is not yet within our technological grasp.”

The prosecution will be hoping to convict Bin Nokia based on the assertion of new scientific studies that claim ear hole cancer is caused by electromagnetic herpes being transmitted from the earpiece of cell phones. Bin Nokia’s defence attorney, Arnold Schwarzenegger and Microsoft lawyers, denies this substantiation stating adamantly that “It’s not a tumour.” The study has also been widely criticized by various left-wing lobby groups who believe it to be an excuse for the American government to take control of oil fields in Iraq and Libya. Survey says most people find nappy headed hoes (mulatos) to be offensive. The pending trial has caused tensions to rise in areas with a high concentration of cell phones, resulting in large scale protests.

“This one guy, like, called me and he was like, is your freezer running? And I’m like, I don’t even have a refrigerator, I’m just an iPhone. What the fuck?” one grief-stricken mobile phone complained.

Head of the ‘Cell Phone Humanity Friendship League’ Herschal Livshitz has called for peace stating, “We have nothing to fear from Slovakian cell phones; they are hardworking and have families just like the rest of us. Please be aware it’s still safe to use your cell phones, provided you use precautionary measures like bribing politicians who need to stamp out the popular practice of stealing and dismantling asbestos sheeting while having an X-ray done, while texting.

Nokia recognizes the urgent need to act with extreme prejudice. Please wait to be seated.

This page has been erased.