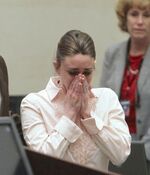 ORLANDO, FLORIDA -- Twenty nine year old Casey Anthony became the youngest ever winner of the prestigious OJ Simpson Award today, after a panel of twelve peers unanimously decided to give the prize to her. Out of thousands of cunning murderers, burglars, rapists, and liars, Anthony was the sole contender left after an exhaustive selection process. It took 33 days of detailed presentations to convince the awards panel that Anthony truly deserved this prize. The proceedings were televised live and have gripped the nation for the past month.

"I can't think of anyone who deserves this award more than Casey," commented tearful CNN legal analyst Nancy Grace, adding, "It's just too bad that her daughter Caylee isn't alive to witness this." Others in the media and the population at large were equally thrilled. "I'm proud to be an American," said one of the lucky members of the public who got to attend the award ceremony in person today, "and having this happen the day after the 4th of July is really something special. USA! USA!" The city of Orlando was considering a reprise of the previous night's fireworks in honor of the occasion.

Award founder OJ Simpson was unavailable for comment as he was continuing his noble hunt for the real killer of Nicole Brown, who he suspects resides in the Nevada state penitentiary where Simpson has been secretly conducting his search for over a year. But former award recipient John Ramsey gave a statement from his home in Colorado. The 1997 honoree said he was "proud" of Casey and said he felt a particular bond with her because he, too, once had a young daughter, just like Casey. "I am sure little Caylee and JonBenet would have been good friends if they were still, you know, alive," Ramsey said.

The sudden announcement of today's award caught the media by surprise, as the winner wasn't expected to be revealed for at least another few days. However, the awards panel worked tirelessly even through the Independence Day holiday to confirm Anthony as the victor. Major national newspapers are still considering their front-page headlines for tomorrow, with the New York Times reportedly going with "Florida court upholds abortion in the 9th trimester."