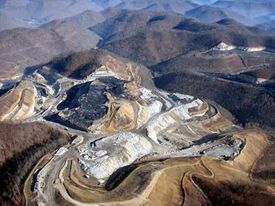 Lexington, Kentucky, USA - Mountaintop Communications announced today the launch of a new satellite television service to be known as the Carbo Channel. "In today's carbon intensive environment, we felt there was an untapped market for such a channel" says MC Chairman Biff Smokestack. Adding, "Joining the multitude of digital cable channels, we feel our new channel will compliment current offerings such as Speed, QVC, Al Jezeera and other carbon lifestyle channels.

Lexington, Kentucky was recently named the US City with the largest per capita carbon foot print in America. "It is no coincidence, we didn't achieve that honor without a dedicated community effort", said Lexington spokesman, Johnny Thistleseed. Programming for the new service will include: "Mountaintop Makeovers", "Coal Slurry Raft Ride Survival", and the cooking show Grilling with Gas and Charcoal BOTH!". Corporate sponsor SixDonald's has agreed to bulldoze one square foot of rain forest for each rating point increase during sweeps. SixDonald's raises much of their bovine food burgers production units in the rain forest region. Genetically modified to tolerate the region, the animals are native to the blighted deserts.

Carbo Americans that wish to add this channel, need to call their cable operator and say "Carbo Me Please". Satellite dish owners can pick up a free de-scrambler at any Hummer dealership or Exxon station. The channel is not available in Massachusetts, Oregon, Seattle or the Twin Cities (Except the Mall of America).