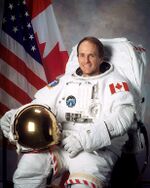 LONGUEUIL, Quebec -- The surprise resignation of the head of the Canadian Space Agency, Steve MacLean, is being met by bafflement across the United States.

One American commented, "I didn't know Canada even had a space program. Is it like an actual space program, or do they just bum rides on American space shuttles, and go get coffee for the real scientists at NASA?" Unfortunately, our reporter did not have the information on hand, but guessed it was the latter.

Another American is quoted as saying, "I think it's adorable that Canada is pretending to have a space program like it was an actual country. However, I wonder if supporting such as fanciful endeavor is wise in these hard economic times. I mean, I assume the current recession is a world-wide phenomena. I heard stuff about European countries were defaulting or something on the news. So, I would assume the recession is effecting Canada too. Then again, its been over 4 years since the crash, so Canada might have recovered. I'm almost curious enough to look that up on wikipedia, I might even check to see who is the President of Canada now."

Others were even more confused about the situation. One American engineer said, "Wait, I thought Canada a British colony. If Canada is independent, why is the Queen's face on all the Canadian coins?" Our reporter then informed him that Canada was been a country since 1867, 1931, or 1982, depending of the criteria for independence, but the British Monarch is still the de jure head of state of Canada. Our reporter was then asked what a de jure head of state was, but could not answer the inquiry. Our interviewee then responded, "No country has 3 dates of independence and borrows a foreign monarch. Did you get this from illogicopedia or something"?"

However, some Americans held the opposite view, asserting that, "Canada is an American state. I think it touches Alaska and Minnesota, although don't quote me on that. Anyway, Canada was conquered by Andrew Jackson after he defeated the British Army at the battle of New Orleans. As part of the peace treaty that ended the War of 1812, America was given all the British possessions remaining in North America. If Canada is a foreign country, why do they speak English?"