UnNews:Caligula Announces Plans to Run in 2008 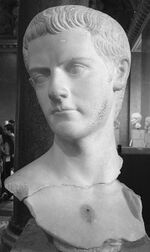 One of the statues the candidate would install in all public buildings, and as many private as he can.

(Rome, USA) - Emperor Caligula today announced plans to run for presidency in 2008. He commented that following the current presidency would "not be too difficult". The announcement, made at the annual Cirque du Soleil conference, proved quite a surprise to many present.

At his press conference, he announced several controversial policies that he hopes to introduce. For example: he plans to build a statue of himself in Palestinian temples; hopes to sexually bless all weddings, homo- or heterosexual; and promises to get the United States into a war with the Sea. He also promised to double or triple the national deficit, if necessary by building an even more lavish stall for his beloved horse, which he appointed to the Senate last month to replace the disgraced Tom DeLay. He plans to run on a platform of lashed-together boats across the Gulf of Mexico on that horse, Incitatus.

"It has always been a dream of mine to one day run for president. I also once had a dream in which aliens invaded and Donald Trump became President of the World..." he commented in his speech. "at the end of it, my band of rebels and I were captured. That's when I woke up."

Not mentioned was his stance on taxes, but the Presidential hopeful concluded the conference with the hopeful note: "flibble."

Caligula, sometimes called by his military nickname "little boots", is best known for his civic accomplishments within the city of Rome. His religious policies are best known; solving differences by employing the philosophy "I am God". This will cause something of a shake-up in most major religions; although Atheists may simply stop believing that there is president.

Although, "I am god" is not likely to be his campaign slogan, but the vote is still out on the final. "I burning your dog" has been suggested as an alternative. He was considering "Vote Fish Penis", as it would have perfectly communicated who he is and what he believes; unfortunately, it's taken.

It is anticipated that the infamous Mr. Hands video will play a key role in Caligula's presidential campaign; although this is not yet certain.

It has not yet been made clear who will be the vice-presidential candidate, but it is expected that Incitatus will follow up his role as a senator of Rome by becoming the next vice president. "Neeeeeiiiggghhhh," Incitatus commented, "snort."

“This is the biggest news I've reported on since last week!”