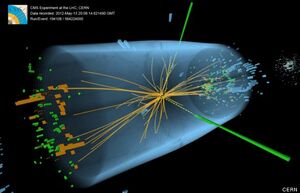 Possible evidence of Amelia Earheart (one of the green lines in the bottom left-hand corner, maybe)

GENEVA, Switzerland -- In a highly publicized press conference, physicists working with the Large Hadron Collider at CERN in Geneva have announced strong physical evidence of the elusive Higgs boson particle. Proof of the elusive "god particle" is game-changing, allowing giving researchers powerful evidence towards answering the unsolved questions of supersymmetry, conditions before the big bang, and the disappearance of Amelia Earheart.

"We are 95% certain that our results indicate the presence of a Higgs boson, the last missing particle of the standard model," said top scientist Jeeves Cranly, "If we can recreate the conditions of the Big Bang down to the nanosecond fifty billion times to discover that little bastard, finding some dead pilot can only be a month away. Tops."

Peter Higgs first hypothesized the eponymous boson in 1964 as a way of explaining how objects in the universe have mass. Higgs, now in his eighties, extrapolated that one could estimate the current mass of Amelia Earheart's drowned remains and hunt them down with an army of bosons.

To make such heroic action possible, one would need to recreate a Higgs field across the entire Pacific Ocean. Cranly suggested some sort of enormous Higgs field generator, plus a giant death ray just in case some fish got in the way, for the mere price of $15 billion in grants.

"Trust us," he said with a cruel smirk, "we're scientists."