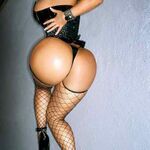 Is there enough glass to do her justice?

It was no surprise to viewers of 7 years of high Kardashian drama on TV, that Kim was a cheater. Confused by a three day hole in her filming schedule, exactly 9 months and one day before giving birth to baby North, Kanya West, whose real name is Soguphus Blemkin, sent investigators, including the television star of “Elimination”, Hemlock Jones, who had poisoned Kim's relationship with "sex tape" participant Ra Ja, to track the missing moments only to find that Kim had been in Nevada sharing a jail house conjugal visit with O.J. Simpson in the North Wing of the aptly named Lovelock Correctional Center, Nevada. DNA tests substantiated West’s suspicions although the balding Simpson refused to give hair samples. Other Simpson suggestions as to where to put the cotton swab were too crude to repeat.

Simpson, who is currently serving a life sentence for the theft of a towel from a Las Vegas casino, admitted that he and Kim have had an ongoing relationship since an unknown stranger murdered his wife. The fact that Kim was a minor at the time did not deter him. “Love knows where da heart mus goes,” replied O.J. “In the old country we didn’t have age limits and I am an old style kinda guy, especially when it involves coun-try.(he winks with his sad sad eyes)” Apprised of the arrival of his new offspring, O.J. seemed overjoyed, then admitted, “Well-a, I guess da glove didn’t fit.”

Kanye has filed to deny paternity of Baby North and added, “Ah bin banging dat’ big bootie fo’ a year, dere ain’t no way dat a baby going to come out of dat fat ass.” Off camera, the Oxford educated West stated, “My dear man, one’s sexual proclivities are private but rectal transgression do not produce offspring. It is fitting that we pay for these sins in heaven, not in the media.”

Kim in the meantime has launched a new fragrance called “Asinine" and has signed Lady GaGa to sing the jingle entitled, "Asinine Means I Love You“. The perfume flacon will be modeled on Kim’s derriere.” Critics questioned, if enough recycled glass existed to do her justice.--