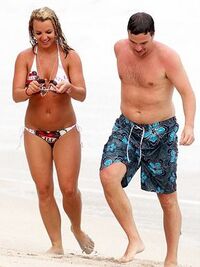 LOS ANGELES, California -- Britney Spears' life is not really special – but when it comes to her relationship with boyfriend Jason Trawick, the pop star says the couple are super together.

"We're really hot," Spears, 29 going on 39, told Ryan Seacrest on his morning show. "We like to watch racy movies, especially Japanese fantasy. We‘re together a lot. We love to make out and do kinky stuff together like those weird little Japs."

Spears, whose new album, Femme Finale, will come out March 29, gushes that her beau's private member is "definitely big." But according to Seacrest, who has known Trawick for a long time, this large organ is totally new.

"I don't want to make you uncomfortable, but I knew [Jason] when he was hairy and stubby," Seacrest told Spears, suggesting too that perhaps he was the influence behind Trawick's life extension program. “I used to tease him!” Seacrest laughed.

Spears, who sounded embarrassed by the comments, giggled, then stood up for her man. "No," she said, "Jason is everything but stubby." She made a gesture with her hands indicating about 10 inches in length, or, God forbid, 10 inches in width.

As for Spears's own sexual routine, she's just as focused as Trawick. "I have a trainer," she said. "I’m bent over the treadmill rail for 30 minutes every morning and we do a lot of practice. I pay to have sex with my trainer. But I get paid by my boyfriend for the same thing. So it all works out."

All of Trawick and Spear’s sexercise may come in handy soon. According to her manager Larry Rudolph, they plan to go on a taboo tour in "early summer" which will include on stage sexual antics for adult-only audiences. “I’m not a kid any more!” Spears giggled. “And neither is Jason!”