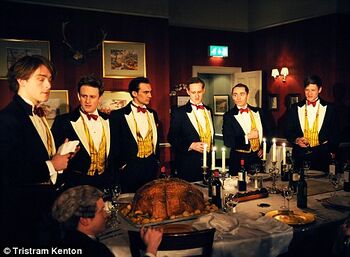 Riots started shortly after this squat was raided

BRISTOL, United Kingdom -- Bristol has again been subject to night of violence and shouting alot, after rioters returned to the area they had reeked havoc on just a week earlier. Around 400 people gathered in the Stokes Croft area of the city to vent their anger at a variety of miscellaneous subjects.

The disturbance occurred mainly around the area of a small branch of the supermarket chain Tesco. Rioters had previously claimed to be protesting against its presence in the 'bohemian' area, arguing it would put local shops out of business and that its convenience food lacks the nuance in taste of those sold by competitor Sainsburys. The latest disturbance occurred with the shop boarded up and long closed, so motives moved from being unclear to what the police called 'criminally vague'.

UnNews took to the streets to talk to some of the demonstrators. 20 year old Quentin Spin told us why he felt compelled to speak up, "For a young student like myself reading law at Bristol University, I can't just sit back and hide in the shadows while all this stuff is going on in this country." When we pushed him to expand on the word 'stuff', Mr Spin became agitated and pushed over a small bin. "This is exactly the kind of questioning I'm fighting against," he told us before wandering off to source some Carlsberg.

Many commentators believe the riots have occurred on the wave of protests in the Middle-East and North Africa. Local man Steve Fielding, who last did something significant in 1981 when he took part in an occurance of washing his hair, told UnNews that the United Kingdom's relatively free democracy should not be a barrier to people standing up for what they believe in. "That's what they want you to think" he repeated on more than one occasion, refusing to state what he was referring to with anything more than a badly coordinated wink. Mr Fielding then proceeded to push over a small bin.

Senior rioter and gentlemen anarchist known only as Swampstirrer has set up the website 'whatAreWeProtestingAgainst.co.uk' in an effort to give the riots a more authentic feel. "We're looking for a common vision, and a lot of people have come up with some amazing ideas man. And that's why I've setup a poll on the site with some of the suitably fuzzy suggestions, so's we can, you know, decide what we're angry about. We're not just a bunch of hooligans pushing over bins man. There are only a finite number of bins. We NEED more bins."