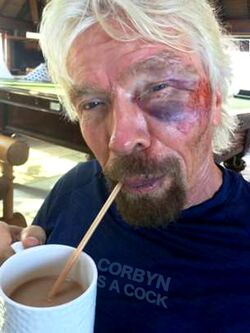 Drinking tea through a straw helps some patients recovery procedure.

VIRGIN GORDA, British Virgin Islands -- World famous businessman and cheerful philanthropist Sir Richard Branson was admitted to hospital this morning after falling off his bicycle during a trip across his private island, Virgin Gorda.

A remembrance party celebrating the 5th anniversary of the destruction of his previous private island, Necker island, may have had a part to play in the incident. Branson, who reportedly left the party in tears of anguish, is thought to been 'cry-cycling' and may have had tears in his eyes whilst travelling home. Clearly tear-stained, he said “...it suddenly got really dark and I managed to hit a sleeping policeman in the road head on. I thought I was going to die”. Though policemen rarely sleep on the roads of Britain, it is common practice on Branson’s private island, especially at night.

PC Rodney Thwang, head of Transport Safety on the island said: “Though cycling on Virgin Gorda at 9.00pm isn’t illegal, it is recommended that all bicycles are fitted with sufficient lamps that will illuminate the road ahead. If you cycle in complete darkness, you’re likely to fall off, or worse, hit someone in the road.”

Despite suffering nothing more than a bruised face and minor damage to his ligaments, Branson was flown directly to Miami for a ‘western’ check up. After an X-ray, no fractures or breaks were discovered much to the relief of a confused Branson, who despite falling down onto his face said: “If you fall flat on your face, at least you're moving forward.”

Critics of Branson quickly leapt to their keyboards to post their opinions about the incident on Twitter. Dolph Cheggers tweeted: “He should kiss his lucky stars really. If he was traveling by train he’d have had to sit by the doors because there’s no seats. If he was traveling by air he’d still be in the airport, and if he was travelling super-sonic… well, remember Michael Alsbury? I do, poor bastard. #justice_4_alsbury”