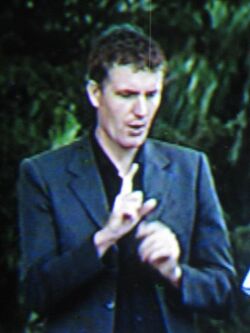 Some random guy from a random Facebook profile where we have found this picture, tries to say: ' I live in a chatroom ' in k-a-l-t.

LONDON –Steven Useless is just 15 years old, but he already speaks 10 languages, among them are Pupa and Ugabuga.

Steven Useless was at an early age talented for languages, when he was 2 years old he could speak and write Arabic fluently and when he was 7 he taught himself Chinese in a small week. At the moment, he masters Chinese at a decent level. The talented boy can call himself a Polyglot, which is a person who masters 6 or more languages, because he speaks 14 languages. Apart from English, German, Arabic and Chinese, the young boy can speak languages like ugabuga, t-l-a-k and Fuck. Besides these 10 languages, he taught himself self-made signe language too, he is capable of communicating in a far dialect of t-l-a-k in sign language, called k-a-l-t, which is quite different from t-l-a-k because it contains harsher insults which are made with the fingers mostly.

Useless wanted to do something unique and new, as he saw people who could speak 20 existing languages or even 30 languages, he was determined to teach himself 10 self-made languages, in order to be really unique. He is already quite fluent in Ugabuga, which contains grammatical feautures which are based on the language of bushmen, but t-l-a-k is a very different language to master too, which is based on StarWars languages, click-languages from Africa and Latin. He has made up 52 cases in his language and all the verbs are irregular. This makes it really hard to learn the language. Unfortunately, Useless can't practice a lot with other people in t-l-a-k and Fuck, because nobody cares about his languages and they don't want to learn it. For this reason, Useless has decided to translate Shakespeare in Fuck and to record videos of himself speaking Fuck, he also responds to his own YouTube videos with another hairstyle and with another account, in order to make it look like more people master this language. Except for Ugabuga, t-l-a-k and Fuck, Useless has created Shitty Latin (in which all the nouns are vulgar), Newer-Greek (which is even newer than New-Greek but totally different in comparison to Old-Greek), klrstvplstm (which consists of only consonants), oauioauiuio (which consists only of vowels), Deptionsh (a made-up language for an alternative version of the movie Deception), oldest language-ish (a hypothetical oldest language of the world of which Useless believes that it corresponds well to the first spoken language, which he has made by using babies and locking them up in order to find out which language they would develop.) and finally .., a language which doesn't consist of anything but dots which you can put at any place you like and words which consist of a random number of dots always different, you need the context in order to know what a phrase means.

UnNews asked some questions to Steven.

UnNeuws: ' Steven, how do you make these languages? ',
Steven: ' It's a gift ',
UnNews: ' Ok, and which language is hardest to speak? ',
Steven: ' .. is quite hard, because you never know how to pronounce dots. ',
UnNews: ' Very interesting Steven, now the final question, what profession would you like to do? ',
Steven: ' I'd like to teach people oldest language-ish, because I think that it's more accurate than Proto-Indo-European or Nostratic. ',
UnNews: ' We don't treat our noses bad Steven. Thank you for this interview. '.