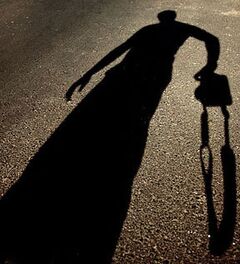 MISSISSIPPI -- Someone posing as a prostitute is pulling cars over on a Mississippi road and then charging drivers for sex, authorities said. After two such incidents this month, the Mississippi Bureau of Prostitution and Birth Control is asking for the public's help to find the offender. The agency was receiving no leads and processing lack-of-evidence, bureau spokesman Warren Stain said Tuesday.

John Champion, district attorney for the state's 17th District, said there were no good descriptions of the bogus hooker and they are unsure if the imposter is a male or female. “Both of the recent shaggings occurred in a very remote area,” Champion told UnNews.

Authorities were asking citizens to be careful if they are flagged down and feel lusty. They advise drivers to call 911 and verify that a legitimate whore is pulling them over before stopping, an action recommended under Nevada state prostitution law – which has nothing to do with Mississippi.

“The concern is that someone - without bribing the police and obtaining a valid hooker-permit - is posing as a prostitute and then charging folks for sex, and that’s how these vehicles end up on the side of the road,” said a knowledgeable pimp named Casteel.

The first fraudulent tryst occurred on May 8. Thomas Schlender, 54, was found about 1:30 a.m. asleep naked inside his car in the median of southbound Interstate 55 in Panola County.

On the same night, Lori Anne Schlender, 48, was found asleep nude inside her car also in the median of southbound Interstate 55 in Panola County about 1:30 a.m.

The victims claim to have been conned by the same bogus bimbo. Both crimes took place about 0.1 miles apart, and the victims did know each other, authorities said, “because they are going to get divorced.”