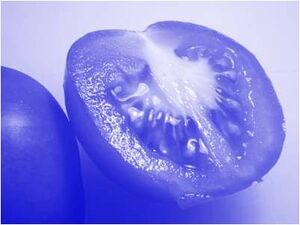 No one thought it was possible.

1 June 2009
On a tomato farm in California—On this regular day everything seemed quite natural, until someone found one of the weirdest discoveries in the history of California; blue tomatoes. One hour later, news crews from around California flocked at this remarkable discovery.

California is one of two of the largest major tomato-producing state in North America, along with Florida. "I have seen many types of tomatoes, in different sizes and shape," said a farmer, "but nothing like this. This is a one of a kind tomato."

China, another major tomato-producing plant, tried to attempt to make the cyan tomatoes (using American taxpayer money) but sadly failed, coming up, though, with the world's first man-eating vegetable.The Chinese government were not able for interview. One Chinese scientologist used holy prayers and toxic DNA injections, but instead caused a small explosion.

The blue tomatoes doesn't cause any harmful effects, but does turn your mouth blue when eaten, and eating as much as five will turn your skin blue. Its quite an amazing sight. 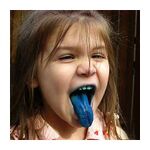 girl after eating a blue tomato 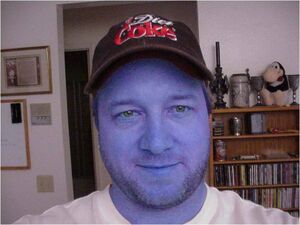 Blue guy from the effect of the blue tomato

Arnold Schwarzenegger made a speech about this strange discovery. "We do not know how this came to be, but I believe that its because California is a special country, no offense Florida. And that means the people of California should be glad for having a fruit with a different color that nobody else has."

After this report, many companies began using the blue fruit, such as Heinz Blue Ketchup, and has been used on burgers as well. Delicious!