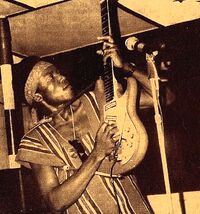 Yushau Shuaib, a spokesman for Nigeria's National Entertainment Agency, reported that, while the concert was deemed a success, many listeners fainted and were gang rapped in the heat, though he did not give a specific number. "Most fans were moved by the music to cheer for Jonathan while poor dissenters were simply hacked up with machetes," he said.

At another concert by Blast, more explosive power chords followed by furious guitar riffs rattled a beer hall in Zuba, on the outskirts of the Nigerian capital of Abuja. Authorities said there were only serious injuries in that show, which was deemed a blast by everyone, especially fans of the band.

Meanwhile, meek sounds of non-metal bands in Nigeria's Eastern state of Borno attracted few listeners in the days leading up to the national dictatorship induction. Those groups were reported to be singing wimpy songs that police described as attempts to influence voters not to vote. Northern Muslims in some areas charged that the presidential election was rigged in favor of Good Luck, simply because he was the only candidate.

This is Jonathan's first full life-term. As vice president, he took over the presidency in May 2010 upon the death of then-President Umaru Yar'Adua, who was murdered in his sleep by Good Luck himself.