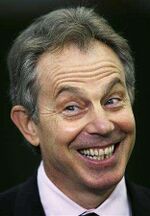 Slavery? Was that my fault? No? Thank god. I'm very sorry

ANTRIM, UK -- British Prime Minister Tony Blair has today attempted to apologise to the victims of slavery, but was shocked to find that none could be found. Because they're dead. An amazed Blair insisted that some of his personal slaves must still be alive, but was assured that these were actually considered servants or advisers, no matter how many times a day they had to lick his feet clean. Undeterred, the PM has vowed to effect the apology even if he has to "drag them out of heaven by their bare bleedin' legs". To this end the church of England has agreed to attempt to communicate with the slaves' spirits so that they can hear Britain's heartfelt apology. Blair released this statement on his upcoming experience with necromancy:

"It is an opportunity for the United Kingdom to express our deep sorrow and regret for our nation's role in the slave trade and for the unbearable suffering, individually and collectively, it caused. And, really, to make amends in a way that has never previously been possible. I feel sure that a few hours of my charm, charisma and sincerity will be more than enough to compensate for the years of pain and death behind them. The knowledge that a man like me, who had nothing to do with the slave trade whatsoever, has offered his apology will surely set their hearts at rest. Although not literally. What with them being dead. Their hearts are probably just so much topsoil just now. Your cabbages could be growing in them. Which makes you a cannibal, you monster. It was people like you who caused slavery damn it- [Blair forcibly restrained]"