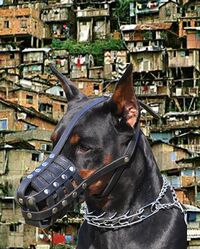 Innocence is a virtue?

MEXICO CITY, Mexico -- Doesn't the corporate mainstream media in America have an agenda in the Trayvon Martin – George Zimmerman case?---You fuckin' Are! There was definitively a preplanned media feeding frenzy surrounding the case. Or something.

But why didn’t they pay as much attention when a black neighborhood watchdog chomped and killed a white Chihuahua in a Mexico City slum?

This is the story that the racist corporate mainstream media in America doesn’t want you to know about, the story of a black Doberman named Pitch, who, when attacked by a 17 year old white Chihuahua, did what he felt like he had to do to survive and bit and killed the tiny Hispanic dog.

Pitch is the size of another equally large black Doberman pincher, while Pico was a skinny, 17-year old Chihuahua, every bit as small as a similar sized dog. Yet Pitch was found innocent by reason of legally standing his fire hydrant.

The impossible to watch video not found below tells the story, an absurd story, of a mainstream media in America with an agenda, a story that they don’t want you to know about.

The Saga of Pitch and Pico.