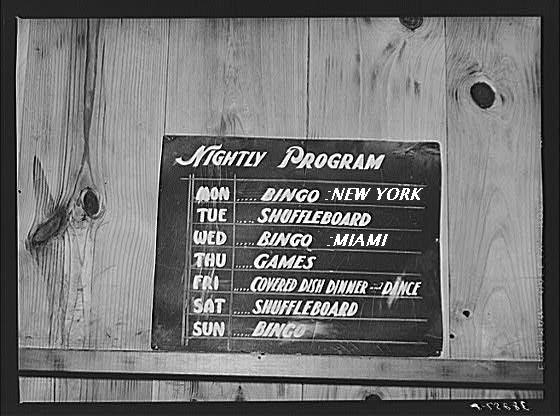 "We felt people were thinking the other nights were repeats, so we changed the names" - Rufus Wagner, park superviser.

Adding city themed bingo has been an attendance bonanza at the pine paneled community center.

"I just love that we have so many players at the LHTCCC. The pot is based on how many people are playing, and now we have one and a half to two dozen each of the three nights!" - Mavis, park resident.

Ruling out changing the name from Bingo to CSIngo, adding the city names to two nights proved to be a very easy transition.

"Old school players would not have liked the idea of the first column being called 'CS' instead of 'B' ", - Wagner.

Although game play should not have been affected, the "what-the?" response may have kicked in, it was explained. Thursday's Game Night, and Friday's Covered Dish Dinner and Dance, need no such crutches to insure high attendance at the center.

"People seem to like to show off their jello salads and crispy wings Friday nights at the LHTCCC" - Jeb, park resident

Other community centers around the country are watching carefully. Shuffleboard is taking a wait and see attitude about its own name change. CBS has no plans to change their strategy.