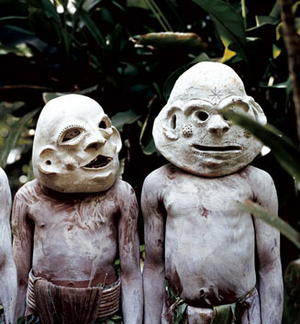 PAPUA NEW GUINEA -- A strong 6.3-magnitude earthquake struck the Pacific nation of Papua New Guinea yesterday, seismologists said, but there was no immediate tsunami warning or reports of damage. In fact, all the reports were of jubilation. Because this latest quake marks the one-millionth 6+ magnitude quake to strike PNG since John Milne began keeping track around 1877.

The Seismological Society of PNG was founded at Milne's urging, in the spring of l880, following sharp earthquakes in PNG every day since time immemorial. Seismographs have been constantly recording ground movement in Papua New Guinea but today ‘s quake was a milestone, the one millionth, and the local people celebrated the occasion with dance and music.

“It’s like playing in the rain”, said one young boy interviewed by AP. “The ground shakes so often that it’s a lot of fun. Kind of like an amusement park. Whenever the ground shakes we all try to stand up. Who falls first is the loser, it’s a laugh, I tell you!”

When asked about damage the boy said, “No damage. We build our homes from bamboo and rubber, and keep everything on the floor made of plastic. We use screen and no glass. And we use plastic tarp for roofs because here the weather is warm. So it’s all just a hoot!” He enthused.

It is so much fun that tourists come on “Earthquake tours” just for a laugh. “Because we have more than one big quake every day. So it’s good fun and good business!” the boy pointed out. “Many people from all over the world want to experience a big quake without risk.”

The quake hit around three kilometers (two miles) off the west coast of the island of New Britain, at 1:09 am (1509 GMT Sunday) at a depth of 192 kilometers (119 miles), the US Geological Survey (USGS) said. It’s the biggest quake to strike PNG since three hours prior.

Papua New Guinea, which is growing rich in tourist revenue from “Quake tourists”, sits directly on the so-called "Pacific Ring of Fire", the foremost hot-spot for seismic activity due to extreme friction between tectonic plates.