BEIJING, China -- On february 18th chinese will celebrate the New Year, according to the Chinese Moon Calendar. Since 2007 is the year of the pig, all China is being decorated with pig thematic, better known as puddles of mud and excrets. People dress with round tails and snout noses all over the streets, and speak using "oink, oink" as words.

Some piggy celebrities are being expected for the big show at the Lantern Festival who will take place at Tiananmen Square in Beijing.

To open the show Wilbur from Charlotte's Web will recite poetry, and give a lecture about the arbitrary and unfair nature of class systems.Then, the sexy Miss Piggy from The Muppets will sing "Memories" by Barbara Streisand. 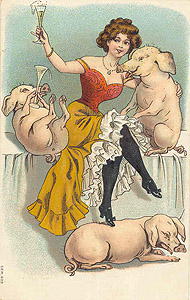 Short after that, Porky Pig will enter the stage on a stand-up comedy presentation. About this show, Porky gave the line: "I-I-I-It will be fu-fu-fu...exploding great".

The Academy Award winner, Babe the Pig, is coming from Australia exclusively to the party, and will gather a bunch of sheep in form of Mao Tse Tung smiling face right in the middle of the square.

The Three Little Pigs were invited to build a huge straw house which will explode with fireworks as the new year comes in.

As the fireworks light up the night, some Flying Pigs will be shot directly at the sky, closing-up the night in big style.

According to Ling Bing Lee, festival producer: "All performers, curiously, made one single request to the production crew: No pork dumplings, at all".