UnNews:Biden: We will pursue ISIS through gates of Heaven 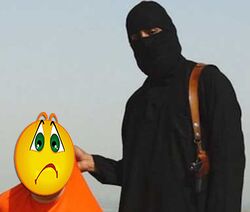 AIR FORCE ONE -- “The United States will not be flummoxed by rogues, formally engaged in harassing Assad in Syria, who are now the supposed killers of two American journalists,” President Obama said Wednesday.

“Those who make the mistake of staging videos will learn that justice will prevail,” the President said. “And you can be sure our adversaries do not feel the same way. That is because we are exceptional. Justice is the ‘American way,’” Obama winked.

Vice President Joe Biden added his own voice to the calls for justice, saying the United States would pursue the killers into the gates of heaven. “As a nation, we are divided, but when people harm even one Democrat, we do not turn the other cheek, we harm a thousand Republicans in return,” he said at an appearance with his son somewhere near Kiev.

“And when that's finished, ISIS should know we will follow them through the gates of heaven.” Biden enthused. “Then we can over-throw another genocidal fundamentalist dictator, who has ruled eternally, without holding a single democratic election, ever!”

Biden's words followed the new ISIS video claimed to show the beheading of journalist Steven Sotloff with a diesel-powered chain saw. Tests proved that it was, indeed, a video, although it does not show a single drop of blood or any beheading. This is the second ISIS-censored beheading of an American journalist, which the militant group said is a result of Obama's indecision on what to do against Assad, who is also fighting ISIS.

U.S. Secretary of State John Kerry said the latest video shows ISIS' unfathomable amateurism. ”For those who worked hard to benefit from the beheadings, this was not how the story should've ended,” he said in a statement Wednesday. “It's a terrible job of staging, acting and editing. Unfathomable amateurism.”

UK Foreign Secretary Philip Hammond said it was “a bungled but revengeful response to the total lack of U.S. airstrikes in support of ISIS in Syria!”

Meanwhile, Putin, the KGB leader-in-chief, said through an interpreter, “Are you aware those videos are staged? They both show a calm man reading a script, and another composed man who never draws a drop of blood; and strangely, the savage group chooses to black out the supposed beheading." Putin grinned. “Later they show the dead person, with his head photo-shopped sitting on his chest; and all of this filmed in front of a blue screen with a room fan blowing air from the side. It is beyond silly!”