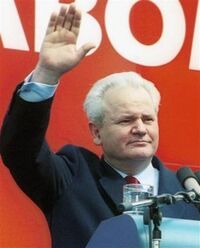 In a shocking turn of events, beloved former leader of Yugoslavia and globe-trotting philanthropist Slobodan Milosevic (of "You Go Slavia, I Go Slavia, We All Go Slavia" fame) has passed away and reportedly ascended to Heaven to live in everlasting life in the company of angels. He was 65.

An outpouring of sadness from around the world began as the death of Milosevic ends hope for a great many good things. "Who will order the paramilitary squads to brutalize my family?" wailed Sabrina Gryzyk of Belgrade. "Who, I ask, who?"

Analysts worried about the impact that Milosevic's death would have on a wide array of international social welfare programs, from third world debt relief, food assistance to countries ravaged by drought and famine, and saving the endangered and adorable panda bear from the brink of extinction.

"Slobodan was truly the Mother Teresa of our time after Mother Teresa passed away," said a despondent Joseph "Il Papa" Ratzinger of Germany. "It seemed like only yesterday, he was eating a big, sloppy sandwich and making a joke about ordering the mass slaughter of entire villages of Muslims. At least, I think he was joking."

The cause of Milosevic's death is not immediately clear, though rumors that he was found dead in a jail cell could not be independently verified.

"Why would Slobo be in prison?" wondered longtime Milosevic fan Ted Kilcommons of Brooklyn, New York. "I mean, he's been kinda lying low for the last six years or so, but prison? That doesn't sound like my Slobo."