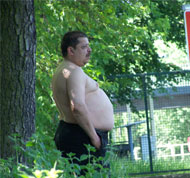 Rooney on holiday in Skegness

WEMBLEY, London -- LA Galaxy star and former England captain David Beckham’s secret plan to remain a part of the England squad has been exposed last night, after an undercover UnNews reporter listened in to intimate conversations between him and Posh from behind a plant in their front room.

Beckham has been gorging himself on pies and beer for weeks in an attempt to replicate the stature of Wayne Rooney, who at five foot six and nineteen stone is one of England’s plumper players. A rather bloated and angry looking Beckham confessed all from the steps of his L.A mansion this morning, "I was so close to achieving my dream of a thousand England caps, and you bastards ruined it." He said, waving his finger at a gaggle of UnNews reporters. "It was a beautiful plan," he scoffed, "I am now fat and drunk enough to pass off as Wayne, and all I had left to do was to batter my face with a cricket bat for an hour, and no-one would have been able to tell the difference."

An UnNews photographer caught up with Rooney while on holiday at Butlins in Skegness. England’s star striker, who’s only scored one goal in ninety five appearances, threw a pint glass at our photographer before falling over in a drunken stupor. He was unable to answer any questions.

The finger of suspicion was pointing squarely at Mrs Beckham this morning, as police found it hard to believe that David was capable of conjuring such a magnificent plan alone, or even with lots of help. Victoria is reportedly now seeking a divorce. "I married an England player," she said. "It’s not bloody fair".

Suspicion switched back to David though, after one UnNews reporter asked what he was planning to do when two Rooneys turned up at training. Apparently, that eventuality had not been catered for.