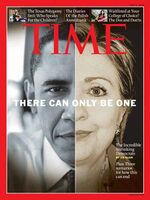 Time Magazine displaying Hillary's Plan to get into office, She calls it: Hilack Obinta

Last night Hillary was defeated in the democratic primaries, Obama will be on the ballot. John McCain however was shocked when Obama got off his bus to see visitors saying "shouldn't he be at the back of the bus?! For a cotton picker he's really Cotten around!" But, Clinton was not impressed with Un-news's Coverage, She said; "I find it offensive that they said Obama has won the Presidential nomination! Everyone knows that I still have the Super-delegate lead and the I still have Pensylvania to win and I have 2117 and nobody votes for Obama Because he is some ******." She seemed to be High as all hell and shit. confused. So we explained it to her, and she cried and scurried off to the HQ of the Axis of Evil, and along with the great russian scientist Kavorkian, they invented "Hilack Obinta" named after Hillary's deformed retard child. The idea was to capture Obama, put him in a big bag, than bring him to Hitler's bunker where he will be split in half, as will Clinton and formed in with her. They will be one, actaully 2, because

because two people are better than one! Clinton attempted this act last night during Obama's speech, whereing a black hoodie and weild a baseball bat to whack Obama so that he would fit in the bag without squirming, while approaching the stage she was stopped, and she screamed "ITS WHATS BEST FOR AMERICA!!! WAHHHHHH!" she is currently in the detroit correctional facility.