al-Masri in his noble hut in the Pakistani mountain range.

SKARDU, Pakistan-- In a world that has been demoralized by the downturn of the economy in recent months, an unexpected casualty has turned up. In a recent interview with GQ magazine, top Al-Qaeda official Abu Ayyub al-Masri has confessed that the recession most people are feeling right now has hit his rowdy band of rebel uprisers as well. "I mean, it's a global economy. We were hit just like everyone else." al-Masri said, calling in from his hut somewhere in the Pakistani mountain range. When asked about the role that he and his group played in the economy's fall, al-Masri wasn't afraid to admit mistakes. "Sure, we underestimated the effect our actions would have on the economy, and the effect the recession would have on us. Recruiting is down sixty percent. Our membership has fallen by forty percent. People don't have the money to just leave their families for a few months and come train in the desert anymore. On top of that, the amount of suicide bombers we are able to put out each month has slowed to a trickle." al-Masri blamed the lack of suicide bombings on the lack of members, and able-bodied men's reluctance to leave their businesses in the hands of their families. "Not that I can blame them. My friend Mahmud almost lost the camel farm that has been in his family's hands for 300 years; his wife couldn't count, and was selling two-humped camels at one-hump camel prices. That is just unacceptable." 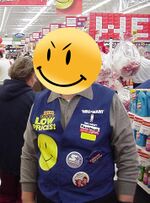 Terrorists are now leaving wholesale terrorism up to Wal-Mart.

He did, however, mention that the ideal of bringing down America and the west remains unchanged. "Don't get me wrong, I am still all for 'Death to America,' and everything, but we have had to really take a look at ourselves, and see where we could make changes. And let me tell you, the soul-searching has been wonderful. We realize that we just don't have the time and the money to pull off the terrorist attacks of old. Wholesale terrorism is more-or-less dead. We are moving into the business of terrorizing individual Americans now."

The news has come as a shock to many counter-terrorism units around the globe. Mark Sanchez of the Army's 105th brigade stationed in Afghanistan weighed in on the situation. "Look, I've been trained to take out entire cells in Al-Qaeda's terrorist group. I've helped stop multiple, multiple attacks on European and American cities in the last 5 years, but this new stuff they've been pulling off, what am I supposed to do about it? Just last week my tent got ding-dong ditched, flaming bag and all. And you can bet they put camel dung in there. Worst part was, I could hear a few of them giggling behind some of the scrap metal in front of the tent, but my pride was hurt man. Nothing I could do, but take what little dignity I had left, go back inside, and clean that shit off my boot."

al-Masri was asked when these attacks would start happening, and he said they already had. "As we speak, thousands of our operatives are out there; in your cities, in small-town America, in Alabama, terrorizing individual citizens of your 'great nation.' You just watch, you'll see."

And watch we have. To this date tens of thousands of reports have been filed from these new attacks. Some have been hit harder than others, but the damage done has been staggering. "Just this week my neighbor's house got egged. I used to walk to work every day, but now there's this guy pretending to be homeless who waits outside my house in the morning, and bugs me for change during the entire 20 minute walk." said Ryan Flood, a resident of Fairfax Virginia. When asked how he knew the homeless man was a terrorist Flood said, "Well, the turban, and his camel that walked with us kind of gave it away." It has even been reported that some of the terrorists have dressed up as Jehovah's witnesses, and are knocking on the same 5 or 6 doors, day in and day out. When asked when the attacks will stop, al-Masri said no time soon. "It's working too well. Attacks are up, expenses are down, and, if I am able to say so, it's WAY more fun than blowing yourself up. We're hooked."