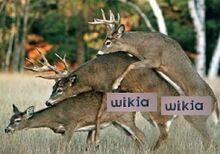 There is a female in this mess, so its not quite completely "gay"

London, England -- In what may be the greatest media scandal of teh year, renowned British naturalist Sir David Attenborough has been accused of ignoring homosexual animal activity.

"Sir Attenborough has a persistent pattern of ignoring homosexual animal behaviors in all his documentaries. Often, we will attribute obviously gay animal as mere "friendly cuddling" or "bro hugs" despite evidence to the contrary," said British gay-rights activist Gaylord Darling. "This homophobic agenda has not place in modern Britain. Well, maybe in North Ireland, but not anywhere on the isle of Great Britain itself."

"I find this censorship appalling," said concerned British mother Lucile Crumpetburgh. "When I purchase a documentary for the sons, I expect the narrator to explain what is actually going on, not to censor it. I don't want the narrator to say two monkeys are giving each other a friendly hug when they are actually engaged in hot gay monkey sex."

"Nature programs have been pushing the hetero-normal for far too long. The issue isn't just homosexuality per say, but all sexual behavior that doesn't mirror western standards. For example, nature documentaries will talk of "families" and "pair bonds", even in species where this concept doesn't exist. There is also an underlying assumption that animal sex is done for pro-creation rather than simple pleasure. For example, in a nature documentary, how often have you seen an animal copulating with an already pregnant female?" said an anonymous anthropomorphic teddybear.

"I concur, when was the last time you saw an animal copulating with an pre-pubescent female on a nature documentary?" said another anonymous anthropomorphic teddybear. "That happens all the time in nature, I can assure you, personally. The reason that this is not shown is due the backward culture bias of some elements of human society."