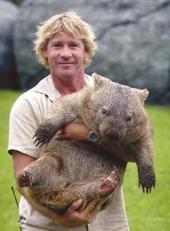 The late Steve Irwin holds up a wombat to show how outraged he is.

Melbourne, Australia -- The United Nations sub-committee group, the World National Boundaries Committee (WNBC), met yesterday in an effort to resolve a dispute with a so called “continent title”. The island of Greenland, about 200 miles off the coast of Canada, appealed the right to be given the title of continent.

The question was raised in light of recent turmoil dealing with the Arctic island. It seemed that since Greenland was in fact the second largest island, and was a separate entity away from North America, it should be given the continent title along with its island-brother Australia.

The sub-committee debated the issue for several hours; which eventually lead to a shocking decision. The committee, frustrated with the complications of adding another continent, decided to downgrade Australia to the title of “dwarf continent” and upgrade Greenland to the same new title. Australia officially became a sub-continent of Asia. The decision sent shockwaves through the world’s populace.

“Australia was my favorite continent,” said Robert Plant, an 11 year old school boy, “I don’t get why they had to get rid of it.”

Despite the public out roar, it appears that the new title is a permanent one.

“I feel we made the right choice,” said WNBC chairman Alex deLarge, “The world is a much less confusing place now that there is a new sub system of continents. I think that in time, everyone will accept the new six continent system.”