UnNews:Ask A Man Being Attacked By A Mob


Dear Man Being Attacked By A Mob:

I think my current boyfriend may be The One, but he always insists on doing things for me. I'm sure he's just trying to be nice, but could this be indicative of some latent sexism? Does he just not think I can do these things myself? 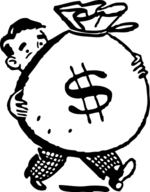 Man Being Attacked By A Mob, Pictured With A Large Bag (That Isn't Money)

Okay, everyone, just calm down. Yes, someone has just stolen all of the money out of this bank. And I may be holding some bags that may or may not contain large sums of money. But the simple truth is that no one knows who did this. I... hey, put that pitchfork down. No, I didn't do it, that would be ludicrious. I... whoa, stay away from me! Hey! Son of a bitch! Goddamn it, I didn't do it!

Dear Man Being Attacked By A Mob:

While at a friend's house, I accidentally sat on his iPod, which he'd left laying on the couch. I offered to pay for it entirely, but we decided to ask you... should I pay for it, since I didn't notice it, or should he, for being careless?

Ahhh! Fuck! Fuck you guys! Put down the torches, those fucking burn things! Goddamn it, that's my house! Don't light my house! Here, here, take this money! Here it is, it's in these bags! No, I didn't steal it. I'm just giving it to you. OW! FUCK YOU! Fucking pitchfork, that hurt! Stop fucking chasing me!

Dear Man Being Attacked By A Mob:

I can't seem to get a girlfriend, no matter how hard I try. I'm average looking and I don't think I have any real tics or personality problems... can you help me?

Nononono, don't pick up those rocks. No, guys, seriously, I didn't... ow! Fuck! I cracked my head on that fucking rock! This is not cool! Not cool, guys! Chill out, let's talk about this. You need to... STOP THROWING ROCKS! I hope you go to hell, you fuckers! And I hope it's full of rocks!

Ask A Man Being Attacked By A Mob is a syndicated column that appears in over 200 newspapers nationwide.