UnNews:Area man can fall in love with anyone 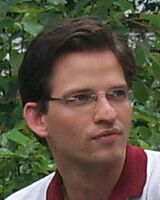 Detroit - Area man Stephen Wollpert may look like an ordinary man, but he is anything but. This unique specimen has an incredible ability which dazzles all who see it in action to the point of speechlessness. It is within Stephen's power to fall in love with any attractive woman he interacts with. "I don't know how I do it," he modestly claims, between sips of coke at a local eatery. "It just seems to happen, you know?"

Despite recent and unrecent claims by authorities on the matter of male/female relationships by noted Vatican authority Cardinal Jean-Baptiste Onlagio, Stephen's ability seems to continue unabated regardless of whether or not he is currently involved in another relationship, which he rarely is. "I don't really give a shit. I got eyes." He says. "And no woman's got me on any leash. Yet."

On a recent trip to the mall, Stephen stopped for a turtle fudge double supreme at the Pretzelmaker store and had a brief interaction with counter representative Ariana Hendrickson. They talked briefly, discussing such topics as what he wanted on his pretzel before Stephen had that oh so common feeling. "I knew I could spend the rest of my life with her." Stephen said.

Ariana Hendrickson, shortly before being fallen in love with by Stephen Wollpert

Stephen's ability has not gone unnoticed by his friends, who flushed with obvious jealousy at the mention of it. "Stephen's such a damn pussy." said Mike Turner, friend and co-worker of Stephen's. "Everytime he sees a hot girl he goes into that whole "I'm going to marry that chick" bullshit. Why can't he just <have sexual relations with> her like the rest of us?"

Thus far, Stephen's actual love affairs have been brief and usually involved the ninth or tenth woman he fell in love with at the occasion, but he remains optimistic. "I know I'll find that one girl someday, that girl that drops my jaw every time I see her. We'll be so happy together." To date, the number of girls that have dropped Stephen's jaw every time he's seen them is approaching six thousand, with little happiness resulting but often coinciding with a familiar dry feeling.

Good luck, Stephen, I know she's out there for you.