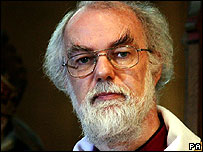 Archbishop Rowan Williams, proudly displaying the superlatively "bling" eyebrows he looted from the desecrated corpse of former Australian prime minister John Howard. "I did not kill him, I merely took advantage of the situation."

"I think that all reasonable people of good will can agree that, in certain cases, we need to STRING 'EM UP! IT'S THE ONLY LANGUAGE THESE POLISH ASYLUM SEEKERS UNDERSTAND! IT'S POLITICAL CORRECTNESS GONE MAD!"

British Dailymailia law is a legal and social code designed to help Britons live their daily lives in a suitable climate of fear, but it has proved controversial in the real world for the extreme nature of some of its punishments. Dr Williams said the UK had to "face up to the fact" that some citizens did not relate to the British legal system, innocence until proven guilty, simplistic ideas not actually working at all in practice, any concept that required more than grunts and farts to communicate or anything else outside their blinkered suburban existences, let alone the prospect of a schadenfreude-laden drop in house prices.

A spokesman for James Brown, the hardest-working prime minister in show business, said the PM "believes that British laws should be based on British values," as carefully explained to him by several tabloid newspaper editors at lunch yesterday.

Conmservative leader David Cameron was unequivocal in his opposition. "The implication that British courts should treat people differently based on their faith is divisive and dangerous. They should stick to doing it the good old way, by social class."

Liberal Democrat leader Nick Clegg said he had "an enormous amount of respect" for Dr Williams, but could not agree with him on this issue. "We prefer to read the Independent, and as soon as they tell me our principles I promise to stick to them resolutely until we actually achieve any power anywhere, at which point we will, following proper Liberal Democrat procedure, proceed to feather our nests and do no other work whatsoever."

Tracy, 21, from Sheppey, commenting from her editorial column next to the picture of her on page three of The Sun, said, "Just so long as we can 'ave a larf, innit."

The British National Party said it was a complex issue in need of debate, but stressed it would only involve a "small aspect" of the law. "Just as long as we can send 'em all back where they came from."

Richard Dawkins noted, "And they said I was going too far when I called your lot dangerous nutters."