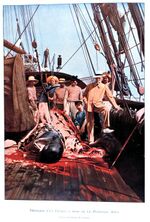 Two anti-whaling activists have been rescued after getting lost in freezing Antarctic waters in an inflatable dinghy. Penguins were seen laughing at the melee. The protesters had sprayed 'acid' on to the decks of one of the whaling ships. However an American and the Australian disappeared in heavy fog while huring abuse at Japanese whaling ships.The international conservation group Sea Shepherd says one of its protest ships plucked the pair from the sea after they'd been missing for more than seven hours. The Japanese whaling ships that were targets of the protest joined in the search.

Meanwhile the Captain of the whaling ship Ironchef said "I was trying to kill whales, when young Nori-san asked me "Captain, what is 'irony', I said we Japanese dont have such a word. Then I was interupted because the radio broadcasted a weak hippy distress signal, 'Mayday' it cried, and I say "ah now this is 'irony'"."

The drunk captain added. "I dont know whats wrong with these people, why they make Akira-san feel great pain? I believe they are from landlocked country such as Botswana, as these people do not know of evil of ocean, ocean has done nothing but kill Steve Irwin-san. Irwin-san was a truly great man."

Daily Yomiuri Newspaper, with some artisticness.