UnNews:Another internet "FBI agent" turns out to be 12yo girl 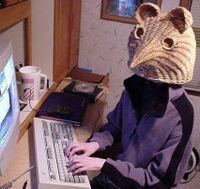 DEAD MAN'S GULCH, Arizona, Friday — A man who arranged to meet a forty-year-old male FBI agent for sexual congress, who confessed the morning after that she was in fact a 12-year-old girl, has been charged with attempting to sexually groom a law enforcement officer over the Internet.

Timothy Cornhole, 39, said he was "shocked" at the revelation. "Particularly after the mouthful of semen and the ass-pounding that ensued," he said. Cornhole had sent explicit pictures and e-mails to the "agent" over the course of three months. Police who searched Cornhole's home found 100 images of police fetish pornography.

Nelly H. Rodreick convinced Cornhole she was a federal agent man after he met her on the Internet. Rodreick apparently attached body hair and used makeup, a prosthesis and a liquid mixed from cornflour, salt and water to keep up the guise.

Cornhole "was very upset when we told him he had been having a sexual relationship with a female and not a macho hunk of masculinity," detectives said.

"He — she — was the most wonderful and considerate lover I ever had," said Cornhole. "I'm heartbroken. My ass still hurts too."

Internet "FBI agent" turns out to be 12yo girl