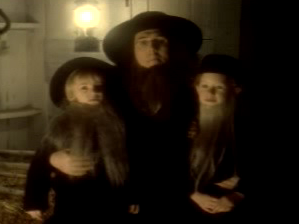 Startling evidence has been uncovered about the Amish's true nature: they are secretly masters of science. Thought until now to be behind the times and not very trendy, it is now known to the world that the Amish are masters of previously thought impossible scientific feats, such as reaching Absolue Zero and using Cold Fusion as a primary fuel source.

"We've had the wool blanket(made by nearby denizen of Amish territory, Ruth) pulled over your eyes the whole time. What did you think all those barns were for?" Asked Jake(pronounced Chakee) Thomas.

It appears the Amish have fooled us all, however. Recent raids in Amish land, all in Lancaster, Pennsylvania have revealed several high tech facilities, all hidden under cleverly disguised barns and cylos.

The most surprising discovery, however, was a 20 kilometer Large Hadron Collider, which is about seven kilometers smaller than the current LHC. When asked about this particular machine, and its discoveries therein, Amish leader Zebediah Smith said, "That is our Large Hadron Collider. We made it about 20 years ago, just for fun. Actually, the Amish community has been silently mocking the Swiss model, and it's become somewhat of a joke to us."

This news is incredibly disheartening to Swiss scientists, who had to shut down their much bigger machine due to a botched power test, and will likely start it back up later this year.

When asked about the various advances the Amish have made in the past year, chief scientist Ezekiel Martin said, "A few years ago we discovered the Higgs Boson, and that made things much easier. Last year, we finished our cold fusion machine." which looks mysteriously familiar.

When asked if they'd share these scientific feats, their answer was a simple "We'll think about it."

But this reporter asks, what is really going on in the Amish camps? They've had us fooled for a good 100 years, and it's not be entirely our fault. By doing such menial subjects as making delicious shoe-fly pies and weaving silken quilts, can we be held responsible for thinking these poor, supposedly obsolete people were the same exact people as we left them?

These pious bastards have hidden their true nature from us, so what else do they have to hide? How many cylos contain nuclear missiles? These new Amish should not be taken lightly, and perhaps even perceived as a threat.

The U.S. Government has yet to issue a statement on this pressing matter.