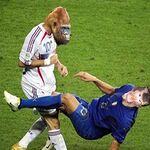 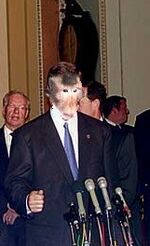 Senator Gorilla expressing disappointment and levelling charges of racism against the opposition-party-inclined media for intentionally misspelling his name Godzilla to stand for a French speaking primate, "Some Gorilla" from North Africa.

A hue and cry followed the event. When queried, Senator Gorilla clarified, "I got really frustrated with the racist attitudes of really rural america. I really never -- really! I really mean that, ok! -- expected this in virgin America. I wanted to bang my head against a wall. This white dude in a yellow shirt looked like a wall to me. I didn't know what "yellow" actually meant. I thought it meant "blue" -- at least that's what my mom told me. Well, maybe she was color-blind but it was never my intention to insult colors. I realized this soon enough when i saw two black buttocks shimmer in my line of vision. I ran towards them but they disappeared. I swear those were yellow walls -- but, of course, I now have no proof."

The video and audio were instantly telecast and within hours they became a controversy. Some real virgins from North America demanded an immediate apology from the media for having misspelled Senator "Godzilla's" name as "Gorilla." But, all acknowledged, it was too late to change Google's cached memory. The media was quickly forgiven.