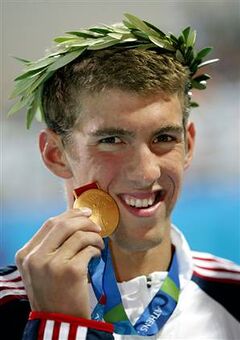 Phelps holding his Nobel Peace Prize or Olympic Gold Medal. It's all the same thing anyway.

STOCKHOLM, SWEDEN - After astonishing audiences for beating Mark Spitz's record at the Olympics for most gold medals won, Phelps has done it again by being awarded all of this year's Nobel prizes.

Earlier today Phelps was awarded the Nobel Peace Prize after winning the Nobel Prizes for Chemistry, Physics, Literature and Medicine all in the past 5 days. Phelps said he was "slightly annoyed" after having to return to Stockholm to collect the prizes 5 times in a row. Here are the reasons as to why the heck he was given the prizes:

Phelps has claimed that "Winning an award once is not enough" and therefore claims he won't be happy until he wins Time's "Man of the year" again, the previous time being 2006 when YOU won.