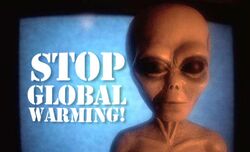 Paying our carbon taxes might save humanity from a pre-emptive alien attack, claims Al Gore

ALPHA CENTAURI -- Klaatu, who is a human messenger in alien form, called a press conference on the International Space Station to flatly deny Al Gore’s claim that Aliens from outer space plan to enforce Gore’s proposed carbon tax. Klaatu took this unprecedented move to counter what he figuratively calls “BS.”

So what is this all about? Apparently Al Gore reported that he had been contacted by extra terrestrials who informed him that they are observing us from a vantage point located behind the Moon in order to determine if changes in Earth's atmosphere - which are symptomatic of a civilization engaged in the mass production of CO2 greenhouse gases - directly or indirectly endangers Earth’s cockroaches. Gore claims that the aliens plan to take drastic action to keep us from becoming a more serious threat to the well being of cockroaches as a species by enforcing his proposed carbon tax.

This dog-faced serious scenario is, perhaps, the most preposterous threat ever coined by Gore, and it was backed by a NASA-affiliated scientist and his cretinous colleagues at Pennsylvania State University, who warned that if humans fail to cough up carbon tax to further enrich the global elite they may have to pay an intergalactic penalty.

Dr. Hans Gretel of NASA’s Planetary Science Division and his colleagues compiled a list of plausible outcomes that might unfold in the aftermath of a failed carbon tax. The scientists claim their warning is meant to help humanity prepare for actual punishment and/or annihilation by irate cockroach loving extra-terrestrials.

In their report, If We Do Not Pay Carbon Tax Will Punishment By Extra Terrestrials Serve Us Right? A Scenario Analysis, the researchers divided alien punitive contact into three broad categories:

Probationary encounters might be mere lie-detector tests administered by extraterrestrials, for example through the use of Vulcan “mind-melding.” While encounters that are characterized by imprisonment or death are self-explanatory. The extraterrestrials could actually become carbon tax law enforcers.

The most unappealing outcome would be if extraterrestrials caused harm to humanity in an attempt to protect the Earth’s cockroaches. Other scenarios suggest that aliens may arrive to eat, enslave and kill us, in that order.

To improve humanity's chances of survival, the researchers call for caution in sexting signals into space, and in particular warn against broadcasting information about our sexual habits and biological make-up that could be used to manufacture weapons which target humans and not cockroaches. Instead, any contact with ETs should be limited to mathematical discourses on how much was paid in carbon tax each Earth year.

But all these suggestions were flatly denied by Klaatu, who is a kind of Alien and is qualified to speak on their behalf. “Even if you never pay carbon tax that still won't endanger the Earth’s cockroach populations,“ Klaatu argues, “It's common knowledge, as confirmed by Wikipedia, that nothing, including 100% pure CO2 or even all-out nuclear war, can harm a cockroach.“