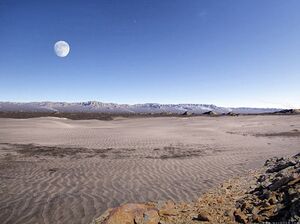 Afghanistan: NAUGHT. A powerful blast rocked Naught’s southern desert - perhaps near the deserted sandy area, but it was not clear immediately what caused it or if there were any casualties or even if the entire story is total hogwash. But the fact that no one resides in Naught makes the possibility of casualties highly nil.

According to No One, a devout Sunni, there were no witnesses, and it is uncertain if a place called Naught even exists, what to speak of a bomb exploding there, or even if anyone cares anyway.

In fact, UnNews has no idea if this story is valid, or even what it’s based on, though, if unStratfor says it happened, then goddamn, it MUST have happened?

Islamic mouth piece, and CIA video store Al Jazeera, claimed the story was most certainly NOT "hogwash" - simply because "There are no hogs in the Middle East" - and suggested that, more than likely it was "bullshit", and, that being the case, it must have been an infidel bomb. But NATO was quick to deny any infidel bombs were detonated near the vicinity of Naught - ever.

NATO Spokesperson Col. Linda Humvee, was quoted as telling UnNews, "I categorically, unequivocally deny that we Infidels have exploded our "infidel bombs" anywhere near 'No-where!'" - military code for the area of Naught.

We have yet to positively confirm nor deny this report, but just to take the piss out of you we’re going to publish it anyway.

UnNews will keep you posted as nothing happens. The media has already dubbed the controversial issue as the "Naught Gate" scandal, which is pretty amazing, considering that it’s probably all total bollocks.